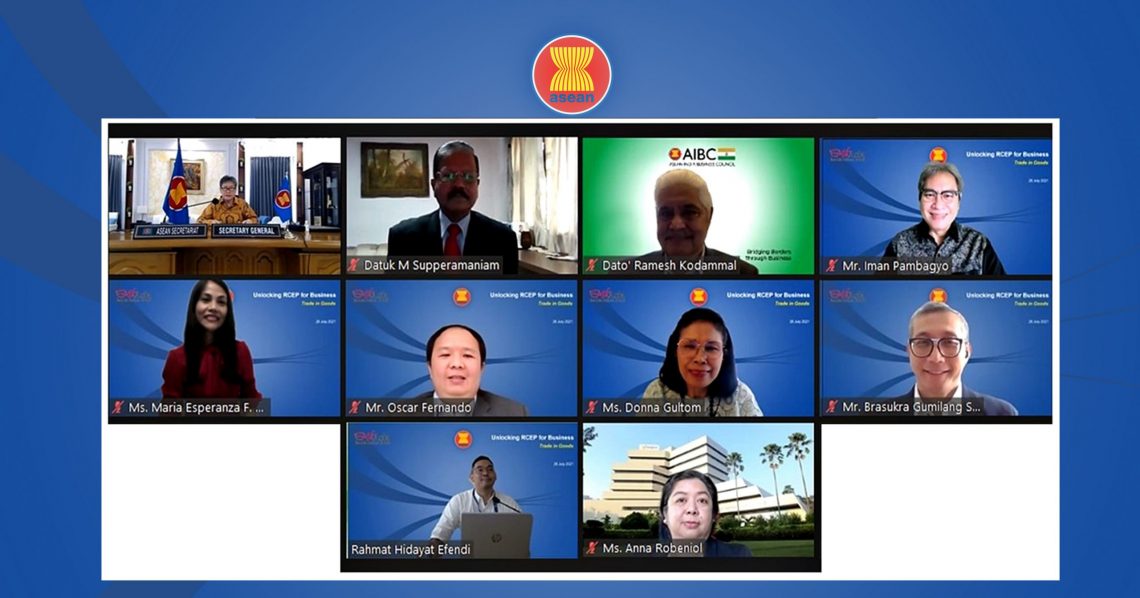 JAKARTA, 27 July 2021 –The ASEAN Secretariat, together with the East Asia Business Council (EABC), hosted the “Unlocking RCEP for Business: Trade in Goods” webinar on 26 July.

The session is the first in a series of webinars on Regional Comprehensive Economic Partnership (RCEP) that will be organised throughout the year as part of its public campaign to better inform the business communities on how to utilise the RCEP for their businesses.

In his opening remarks, the Secretary-General of ASEAN Dato Lim Jock Hoi mentioned that, due to the pandemic, the value of ASEAN’s external trade declined by 5.5 % and the region’s economy recorded a contraction of 3.3%. However, the region’s economy is projected to bounce back this year.

“ASEAN’s economy is projected to grow by 4.0% this year and 5.2% next year. But this positive economic outlook is no reason for complacency as there is a risk of uneven growth which could exacerbate development gap and therefore, we need to ensure high utilisation rate of the RCEP Agreement among businesses in the region”, said Dato Lim Jock Hoi.

The webinar focused on the trade in goods aspect of the RCEP Agreement and touched on a number of important issues, such as the schedule of tariff commitments, preferential tariff treatment, non-tariff measures in trade in goods, and trade remedies under RCEP.

High-level panelists and key speakers, many of whom were involved in the RCEP negotiations, including Iman Pambagyo, who chaired the Trade Negotiating Committee, participated in the webinar.

The panelists all agreed that public outreach is as important as the negotiation process itself. Without a proper public outreach campaign on how to utilise preferences offered by the RCEP, the Agreement would run the risk of having a low utilisation rate and minimum impact on businesses.

Panellists also suggested that the ASEAN Secretariat work closely with regional and national business councils to organise events targeting small and medium enterprises to raise their awareness on the benefits of RCEP.

Parallel to the ratification process, preparatory work for the Agreement’s entry into force is also currently underway at the Interim RCEP Joint Committee. The full session of the webinar is available at this link.